… Or how to generate economic well-being.

– Presentation of the mural intervention –

 ¨In order to feed themselves and continue growing, the out-of-control industries duplicate their infrastructure and infiltrate the adjacent areas, consuming the resources and spaces that are needed for other social nuclei. Or, how to generate economic well-being.¨ Intervention realized in June 2018, Pasaje Gálvez 134.

As inhabitants of this city, we are observers of a progressive loss of waterfront access due to the expansion of the port. This phenomenon does not take into account the people’s well-being, instead it prioritizes industrial development and economic advancement over the needs and desires of the citizens. Although the ocean is only a few steps away, our access to it is denied: another example of the privatization of places and natural resources that belong to all of us.

Since the beginning of the history of Valparaíso, the port activities have coexisted with the inhabitants´ unlimited access to the city’s coastline. However, growth at an industrial level has changed the relationship between the the public and private interests within this space, favoring the economic development that has taken over the territory without respect for the wishes of the residents. 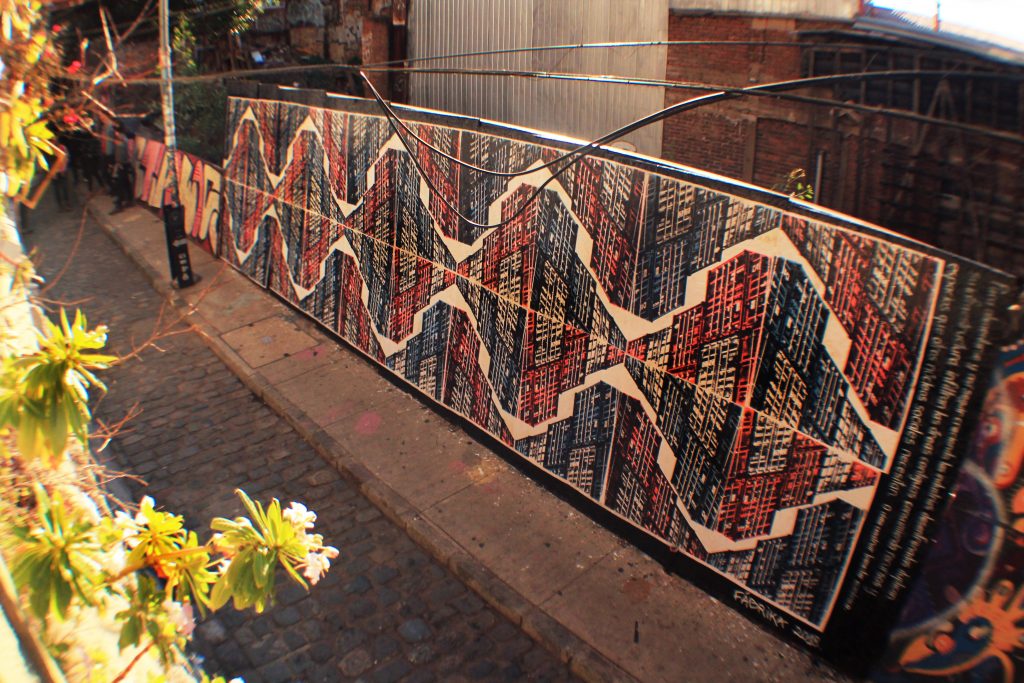 As a reflection on this issue, we have created the artwork ¨…Or how to construct economic well-being,¨ a 22 square meter mural made from silkscreened paper on precarious wood boards that form an improvised wall in front of the studio. This barrier hides the ruins of a house that burned down many years ago, the same way that OSB walls always hide sites that have been destroyed or are in the process of reconstruction. The composition of the artwork was created from an analog photograph of the containers in the port, which are rotated and repeated to create an abstract geometric pattern that piles up in the way that the containers in the port appear. Accompanying this image is a phase inspired by medical language that we modified to fit the context that we are dealing with, making an analogy between industrial growth and malignant tumors.