“Fluctuat Nec Mergitur” is one of the first works of art created by the studio. It is a portrait of five pelicans on the roof of a fisherman’s stand at the Portales wharf. There the pelicans live in community, accustomed to eating the fish remains. Close to nature and the animal community, the fishermen face the fickle climate of the Pacific Ocean before dawn in order to offer what they catch during the day. There is a great collaboration between customers, fishermen and pelicans since they keep each other company and help each other to survive. 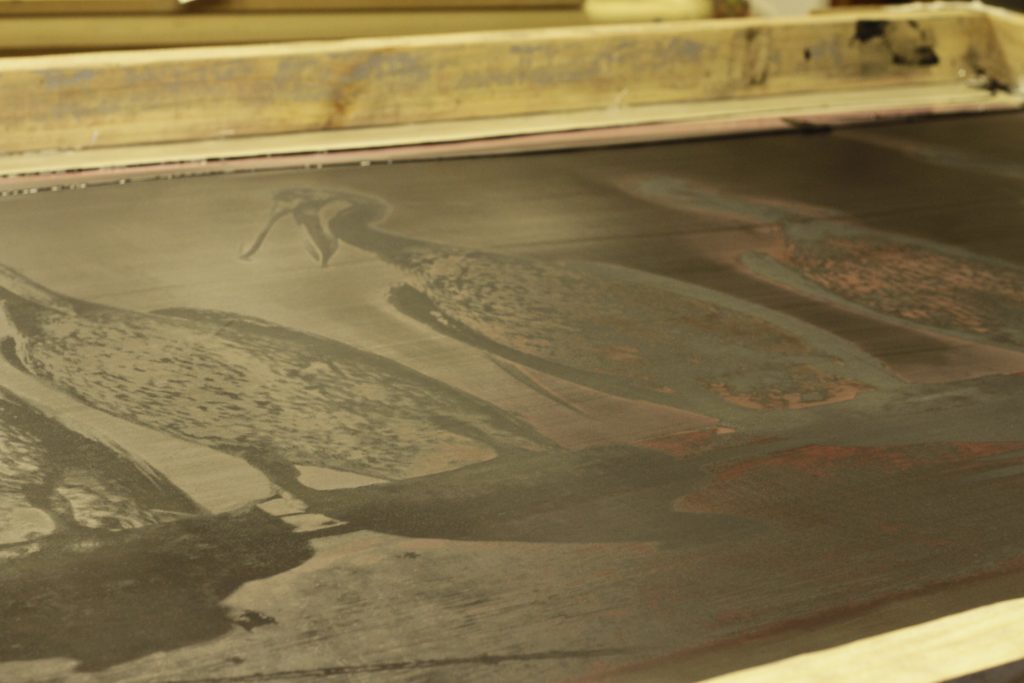 ¨Fluctuat Nec Mergitur¨ (tossed about but doesn’t sink) is a reference to the unity which keeps the boat afloat when confronted with stormy seas. As interpreted by Brassens in the song ¨Les copains d’abord¨ (first the friends), it is the solidarity within the marine world. The pelican is transformed into a symbol of the studio. Through there perspective that we have of our society, touristic activity that is reduced to consumption provokes a kind of internal conflict. We try to solve this by acting in agreement with our community, expressing our values through our projects. This almost prehistoric animal accompanies us in solidarity to confront any challenge, the rejection of individualism and valuing the traditional harbor environment over the industrial development. 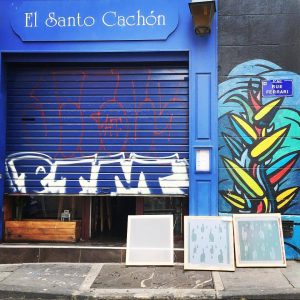 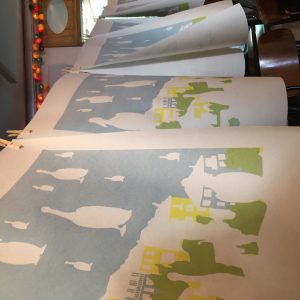 As an homage to Magritte´s ¨Golconde¨ painting, the ¨Golcondian Pelicans¨ wallpaper communicates our commitment against the globalization of ideas. Presenting a pattern of men dressed in suits and bowler hats above Bruxelles, Magritte questions the reproduction of human conduct during the industrial era. The pattern of pelicans above the hills of Valparaíso suggests the reproduction of conduct based in solidarity within the city.

We utilize wallpaper as the support for the artwork, which is a symbol of the decorative styles that were born during the industrial revolution and generally used as purely esthetic decoration, to use it as a reflection of this very phenomenon. What Magritte communicated remains true in modern times, and that which interests us is to show how to face this uniformization and coldness of individualism. We find the response in the figure of the pelican, which is an animal living in community and without hierarchy. As with many behaviors found in the animal kingdom, the reproduction of the pelicans behavior in our society could be a solution to the individualism that isolates some people from others. 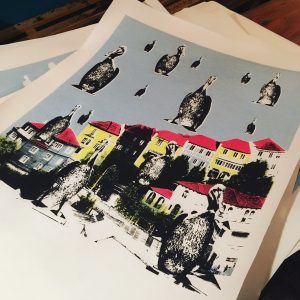 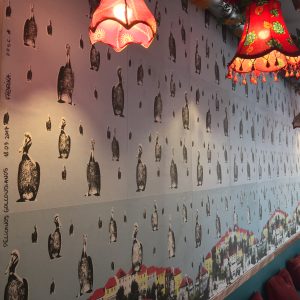 Through the silkscreen medium in its most artisan form, we were able to create a work of art that isn’t reproducible, in contrast with industrial wallpaper. After the creation, the screens were erased and the colores recycled with new pigments, which prevents the identical reproduction of the work. The final product of a multi-stage process is and act of love for manual techniques, small-batch production and respect for the artistic profession.
The wallpaper was created in Marseille (France) on occasion of the first exhibition of TOURiSTE or not TOURiSTE (Casa Consolat), it was also installed to be as durable as possible and was inaugurated on September 18th 2017 at our friends´ chilean restaurant El Santo Cachón, Ferrari 40, Marseille.